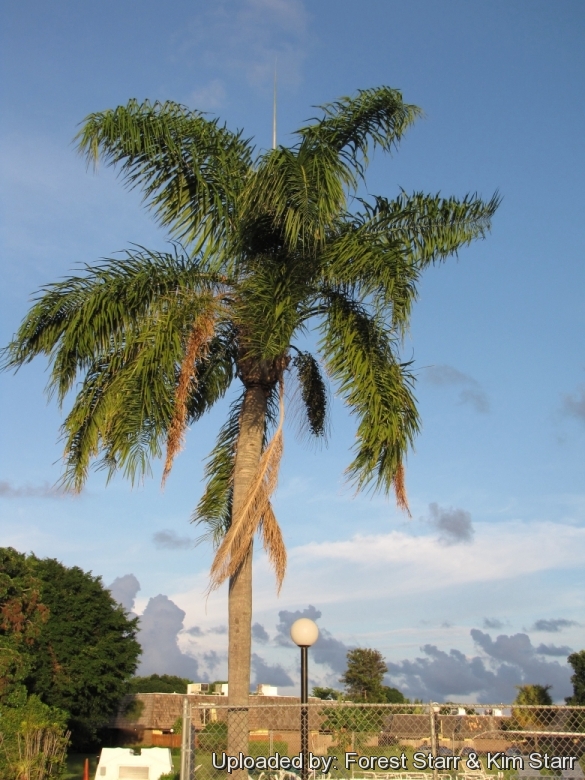 Origin and Habitat: South America, from northern Argentina north to eastern Brazil and west to eastern Bolivia, but widely introduced in tropical and subtropical areas due to its popularity as an ornamental garden tree. It has naturalized, often becoming invasive, in the Australian state of Queensland, in the United States state of Florida and elsewhere in favourable habitats.
Habitat: native forest and rainforest particularly along river banks and near the coast.
Ecology: Its fruits are sought by birds, as well as by mammals. It spreads by seed that is bat-dispersed.

Description: Syagrus romanzoffiana is a medium-sized to large solitaire palm, quickly reaching maturity at a height of 7 to 15 metres tall. It is easy to grow and very popular in cultivation.
Trunk: Single of medium thickness, upright, grey, smooth up to 20 m high (but usually less), 30-60 cm wide, ringed with widely spaced horizontal old leaf scars
Crown: Very characteristic with a graceful, open, irregular drooping canopy of soft and fluffy fronds. Spread 4,5-7,5 m. The dead fronds are persistent and eventually absciss from the trunk after several months, but until then, they can look quite untidy.
Crown shaft: no
Leaf type: Large sized when mature, up to 5 m long, odd pinnately compound, plumose, evergreen, alternate, glossy, bright green divided with 150–250 leaflets per side often in clusters of 2–7. Leaflet 45-100 cm long and to 3 cm wide, lanceolate with parallel venation spreading in different planes giving a plume-like appearance, margin entire.
Flower: The large inflorescence, initially enclosed by 2 woody pointed bracts, is a very attractive branched panicle up to 2 m long. Flowers white to yellow-gold, showy, in groups of 3 where one flower is female and 2 male.
Blooming season: Mostly spring flowering.
Fruits: The fruits (dates) are produced in hanging crowded clusters and ripen during the winter months. They consist of a hard nut surrounded with a round or broadly ovoid, thin layer of fibrous flesh that is orange and sticky when ripe; fruit length 12-30 mm, 10–20 mm wide. The fruits are edible sweet and could be described as a mixture of plum and banana.

Subspecies, varieties, forms and cultivars of plants belonging to the Syagrus romanzoffiana group 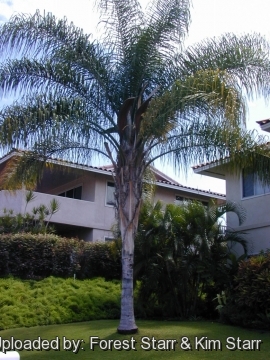 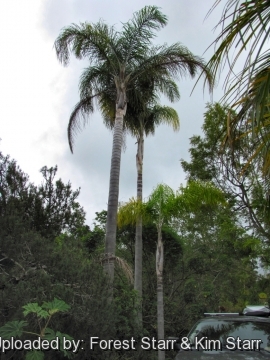 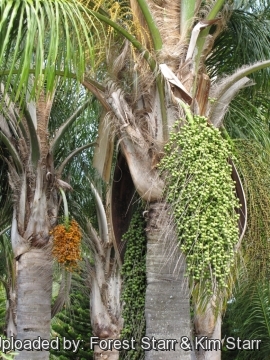 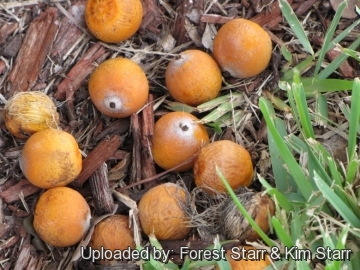 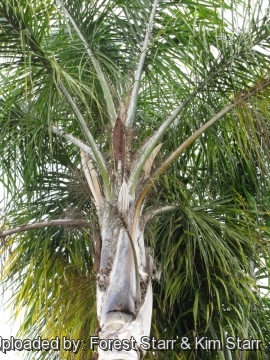 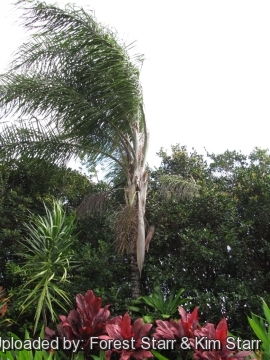 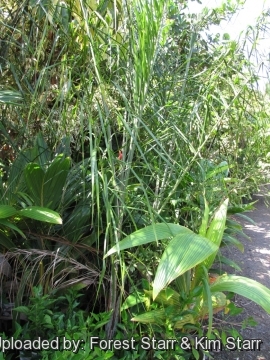 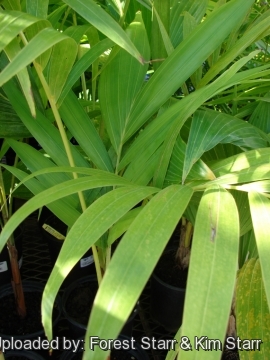 Cultivation and Propagation: Syagrus romanzoffiana is a very popular palm used in landscape around the world in tropical, subtropical and temperate regions due to its imposing attractiveness and hardiness. It is easy to grow in a wide variety of conditions. Both drought and frost resistant. This is the most extensively cultivated palm along streets, highways, and in parks and gardens in southern California. Very desirable because of its erect-spreading crown of long feathery green leaves. Does not endure heavy frosts.
Soil: It is most suited for acidic, well-drained soils comprising clay; loam; sand and shows severe mineral deficiencies on alkaline soil.
Fertilization: Need a perfect fertilizer diet including all micro nutrients and trace elements or a slow release fertilizer applied in spring and summer, or according to package directions. Micronutrient deficiencies are a serious problem on soil with a high pH. This disfigures the palm by stunting the young leaves and can kill it. To prevent this problems the palm requires regular preventive applications of manganese and/or iron to help keep the fronds green. If it doesn't get enough Potassium (K), the older leaves in well-drained soils take on a necrotic spotting. Necrosis of the leaflet margins, followed by leaflet tip necrosis will also become apparent.
Water Requirements: It tolerates low levels of humidity and summer drought, though it prefers evenly moist but not consistently wet medium.. When supplied with adequate moisture and fertilizer it is also fairly fast growing. This palm is very drought tolerant once established. It dislikes soggy soils. Water young plants for healthy look and fastest growth.
Light: Can take full sun from an early age, but it also does well in part shade with some direct sunlight when young.
Aerosol salt tolerance: It is slightly salt-tolerant and may be grown near the sea protected by dunes or building.
Wind resistance: It endures drying winds.
Hardiness: These palms are some of the hardier palms, tolerating light frosts for short periods, although it will require some protection if cold periods are longer than normal. ( USDA hardiness zones: 9B through 11)
Roots: Surface roots are usually not a problem.
Maintenance: The dead fronds are persistent and often require pruning to remove. As the old fronds die, these should be trimmed off and the leaf bases allowed to dry out, but is susceptible to Fusariam Wilt, a fungal disease that is spread by pruning with 'infected' shears/pruners. All those pruning multiple palms are urged to clean the instruments with bleach or something that kills the fungus. Fruit, twigs, or foliage cause significant litter, persistent at the base of the tree.
Uses: It is used in gardening and landscaping in many parts of the world though in sheltered areas it will survive short periods below freezing point. It is not suited to small gardens, due to its eventual large size, The huge bulk of Syagrus romanzoffiana dwarfs most houses. This palm is very good for adding a tropical feel and widely used along boulevards, on campuses, lawns and in parks and grouped in trios to form focal points in cityscapes. It is recommended for buffer strips around parking lots or for median strip plantings in the highway. Seedlings are quite slow, but speed up considerably once they start to trunk. Small specimens are inexpensive and readily available and look great in pots on the patio, near the pool, or in pairs flanking entryways. And thanks to its drought resistance and durability to heat it can thrive in harsh urban conditions. It is not a good indoor palm and gets "top heavy" as a container plant
Pest and disease: Long-term health usually it is not affected by pests even if scale my be a problems. Ganoderma butt rot caused by Ganoderma applanatum (formerly Fomes applanatus) can kill Queen Palm. There is no control for butt rot, only prevention. This palm is not affected by lethal yellowing disease.
Propagation: It is exclusively propagated by seed. Seed is very easy to germinate, and small seedlings carpet the ground under mature specimens.