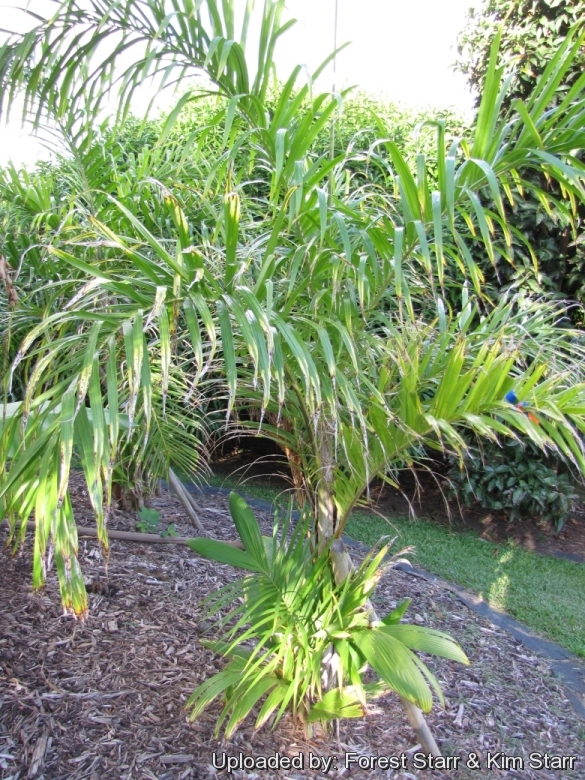 Origin and Habitat: South and Central America, but the exact centre of origin is controversial, possibly western Amazon or western and north-western side of the Andes, and lower Central America. Cultivated for its fruits in Brazil, Bolivia, Venezuela, Peru, Honduras, Guyana, Ecuador, Colombia, Central America, Mexico, Caribbean islands, Australia, Indonesia, Malaysia, Papua New Guinea and the Hawaiian islands)
Altitude: Usually from 0 to 800 a.s.l., but occasionally above 1000 m in the Andes.
Habitat: It grows in several habitats in the humid tropics, mainly along river beds, and in primary and secondary forests in areas with profuse and well distributed rainfalls (2000-4000 mm per annum), and average temperatures above 24° C. It is rarely found in regions with more than 2-3 month of drought.
Ecology: Insects, wind and gravity are the three pollination mechanisms in Bactris gasipaes. Many species of birds feed on this wild palm, notably macaws, parrots and parakeets, all members of the family Psittacidae.

Description: Bactris gasipaes is a monoecious palm, 6-20 metres or taller.
Roots: It has an extensive but fairly superficial adventitious root system.
Stem: Erect, cylindrical, straight, slender, single or, more often clustered (1-15 stems), unbranched, 12-30 cm thick; generally densely armed with stiff, black spines in circular rows from the base to the summit, alternating with nodes without spines. There are occasional specimens with only a few spines. Suckers (off-shoots) arise from basal axillary buds, and usually vary in number from 1 to 12.
Crown: The crown has 10-30 fronds.
Leaves (fronds): Reduplicate pinnate, up to 4,5 metres long on a 1 metre long spiny deeply channelled petiole. The petiole-sheath is densely spined 0,5-1,8 m long and the rachis is 1,8-2(-4) m long. Leaflets about 120 in each side of the rachis clustered in groups of 3-7, held in different planes, the largest to 60 cm long, 3 cm wide, dark green, often covered in short bristles.
Inflorescence: The palm is monoecious with pistillate and staminate flowers in the same inflorescence. The inflorescence is interfoliar, up to 80 or more cm long, peduncle unarmed, aout 50 cm long. The male flowers achieve anthesis 24 hours after the females, and the pistillate flowers are still fertile to some extent at that time.
Fruit: Drupe with edible pulp surrounding the single seed, 1–7 cm long when mature and 3–5 cm broad. The rind (epicarp) of the fruit green turning red, yellow, brown or orange when the fruit is ripe specled with black lines, depending on the variety of the palm. Mesocarp dry and starchy or moist fibrous or oily, thin to very thick; endocarp woody, three-pored. Usually a mature plant produces 5-15 fruit bunches per stem (Potentially up to 25). Each bunch weight 3-7(20) kg.
Seed: 1-3 cm long, endosperm omogeneous.

Subspecies, varieties, forms and cultivars of plants belonging to the Bactris gasipaes group

Cultivation and Propagation: This is an excellent palm adapt to tropical and subtropical climates in humid regions, specially along with rainforests and, once established, will grow quite fast and does well in cultivation.
Soil requirements: It has a fibrous root system and benefits from deep organic, acidic, soils that are fertile and well drained but thrives on wide range of tropical soils, like coastal marine alluvial clays, soils of volcanic origin, acid sands and other coastal alluviums and even in seasonally flooded areas and swamps. Waterlogged, highly lateritic, extremely sandy, stony or peaty soils should be avoided.
Watering: It prefers adequate moisture, can tolerate temporary flooding or a fluctuating water table, as might be found along rivers. This palm a will tolerate occasional dryness if not prolonged.
Light: Will take full sun as it matures, but will grow better with some shade. If home-grown, give some sun as with most tropical palms.
Fertilization: Need a perfect fertilizer diet including all micro nutrients and trace elements.
Aerosol salt tolerance: It is moderately salt tolerant, but does a lot better inland then it does on the coast.
Hardiness: It needs high temperatures and is suited for tropical or subtropical climate and seedling growth arrested below 15°C. They do not bear temperatures even if just close to 0 °C. Mean maximum temperature of 30-32°C and mean minimum of 21-24°C (USDA Zones 11-12)
Wind hardiness: Will grow better with slow wind.
Garden uses: It is an excellent landscaping palm if you can water it a lot.
Food/beverage use: Bactris gasipaes has been used for centuries as food by Pre-Columbian populations of central and south America and is widely cultivated for its fruits. The fruit has a nutritional composition similar to maize and the red and orange types are rich in vitamin A. the cooked flesh, it has a texture not unlike sweet potato or manioc', and a unique flavour, which is a bit of an acquired taste. Like sweet potato, pupunha must be cooked for 30 to 60 minutes in salty water. The cooked fruit is then peeled and pitted, ready for eating as a snack or with coffee at breakfast. The cooked fruit can also be dried and ground, and either made into an orange-coloured flour used for baking traditional dishes or, in north-western Brazil, fermented into a tasty drink called caissuma. A favourite dish in some areas is simply the fruit halves with the seed depression filled with mayonnaise. It may be eaten raw after being peeled and flavoured with salt and sometimes honey. It can also be used to make compotes and jellies or to make flour and edible oil. It is also be cultivated for heart of palm, and has commercial advantages in being fast growing; its agricultural characteristics are adequate to substitute other palms such as Euterpe oleracea and Euterpe edulis. The heart of palm is used fresh as a vegetable or for canned palm hearts ... as killing a stalk to harvest the heart only kills that stalk- the palm, since it clusters, can go on living to be harvested later.. and it's pretty fast growing so it can replace the cut canes in a few years.
Other uses: The leaves are used to cover roofs or in wickerwork.
Warning: Do not plant this palm where children play as the sharp spines are easily capable of breaking the skin, and protection should be worn when working around a Bactris gasipaensis.
Propagation: The fresh seeds germinate easily. If not properly treated, the seed does not have long shelf life.