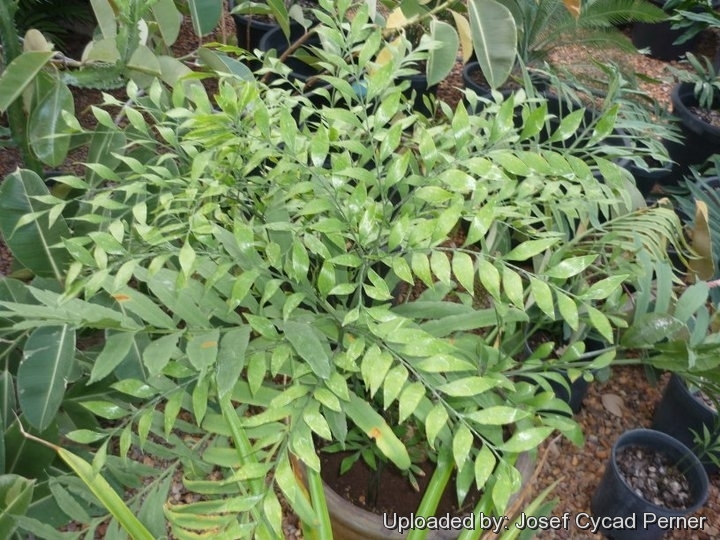 Origin and Habitat: Bowenia spectabilis is found scattered in open situations in and around rainforests in northeastern Queensland, Australia. It also occurs in the coastal and near-coastal areas, ranging from Cardwell to Cooktown, with an outlying occurrence in the McIlraith Range and near Starcke on the Cape York Peninsula. The population size is estimated to be between 10,000 to 20,000 plants. At present the the population trend is considered to be stable.
Altitude range: This species is found from sea level up to 750 metres.
Habitat and Ecology: This species grow in the warm, wet, tropical rainforests and favours a wet/dry seasonal climate, mainly on protected slopes and near streams, primarily in the lowlands and in adjoining tall wet eucalypt forest ecotones. The species does not occur above 800 m and appears to be limited by a mean minimum temperature rather than other climatic or environmental conditions.

Description: The genus Bowenia, includes two living and two fossil species of cycads in the family Zamiaceae, sometimes placed on their own family Boweniaceae. Bowenia spectabilis is distinctive among cycads because it has bipinnate leaves. This does not occur in other genera within the Zamiaceae family. B. spectabilis is a low growing species and often mistaken for ferns by people who come across them in their habitat The most used common names bear evidence of this. Bowenia spectabilis is called "Zamia fern". It has a hidden or subterranean caudex which is no more than 10 cm long and elongate in shape. The tap root is also elongate and even in semi-mature specimens goes to depths of 60 cm. The fronds appear at the end of a long narrow petiole stem, the rachis branching fan-like, sometimes into as many as seven branches. Pinnules are arranged evenly along each branch of the rachis giving the appearance of a circular or semi-circular shiny green fan on a long stem. These plants are quite variable in leaves shape.
Derivation of genus and species name; The genus was named in honour of G.F. Bowen, first governor of Queensland. The species name come from the Latin, “spectabilis” visually striking or remarkable, from the unusual habit.
Stem (caudex): Elongate, rather turnip-shaped and tuberous, to 10 cm in diameter, with an elongate tuberous taproot, single, but with1-5 short, slender leaf and cone-bearing branches.
Leaves (fronds): 1-7 in the crown, erect. The large fronds of this genus are peculiar in being bipinnate with 4-10 spreading branches (pinnae); they may reach a length of 2 metres and have a long slender petiole 1-1.5 metres in length, the branching fan of pinnae is flattened out into a rough circle at the top and has a diameter of approximately 1-1.25 metres. Leaflets 7-30 on each branch, obovate- lanceolate, asymmetrical with a more or less pronounced falcate curve, decurrent at base, 7-15 cm long, 1.5-4 cm broad, attached by a very short stalk the veins branch dichotomously and diverge slightly. Margin usually entire or a few with occasional coarse lacerations, or rarely regularly shortly serrate. Specimens with serrate leaflets occur occasionally in most populations through the range of this species. These have been distributed in horticulture as Bowenia "Tinaroo", since this variant is especially common on the Atherton Tableland near Tinaroo. Occasionally entire and serrate pinnae may occur on the same plant too. New fronds appear only once a year, and this pattern is only changed if fire damage, roving animals, or cultivation destroys the existing stems.
Male cones: Stalked, ovoid, to 5 cm long, 2.5 cm in diameter, emerging from the ground within 5 to 15 cm from petiole bases. Sporophylls broadly cuneate, distally dilated and truncate.
Female cone: Sessile, ovoid to globose, to 10 cm long, 10 cm in diameter; sporophylls in about 8 ranks, the expanded ends almost hexagonal, 3-4.5 cm broad, about 1.5 cm high.
Seeds Up to 3.2 cm long, 1.8 cm wide; sarcotesta white maturing to dull purple.

Notes: With the exception of Stangeria paradoxa no more remarkable Cycadeous plant has been discovered than Bowenia. The venation of the pinnules (leaflets) of Stangeria paradoxa so exactly simulated those of a Lomaria (a fern) that two authors had unknown to one another referred it to that genus. Bowenia leaf is not simply pinnate as in Stangeria and other Cycadea but decompound like in ferns of the genus Marattia. Bowenia is an extremely ancient genus, at least 45 million years old, which has endured almost unchanged over the millennia. Botanical evaluation has shown that the leaflets of the modern species differ little from those of fossil specimens of Bowenia eocenia and Bowenia papillosa. There are two living species, Bowenia spectabilis ( a.k.a. Zamia fern) and Bowenia serrulata (Byfield fern), which are restricted to central and northern Queensland. As a genus the most prominent character of Bowenia is the compound leaf, its general characters (all but shape), texture, and venation; the leaflets do not differ from those of Macrozamia, and are so very similar to those of some West Indian Zamias, that it is difficult to distinguish them generically, except that in Bowenia the leaflet is decurrent by the petiole and not articulate with the rachis. The habits of growth caudex etc entirely accord with that of the South America Zamias as does the cones and seeds.