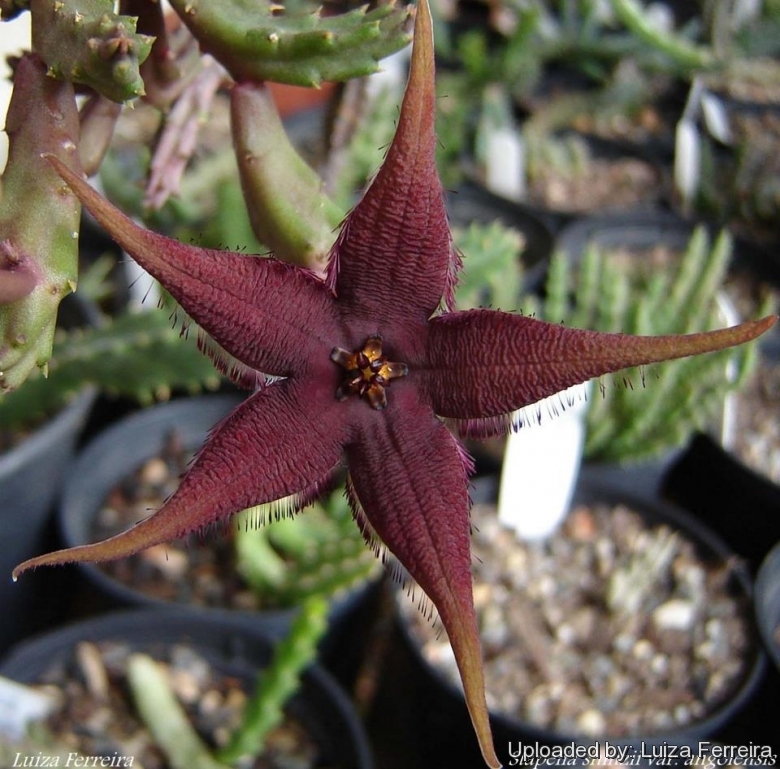 Subspecies, varieties, forms and cultivars of plants belonging to the Stapelia schinzii group 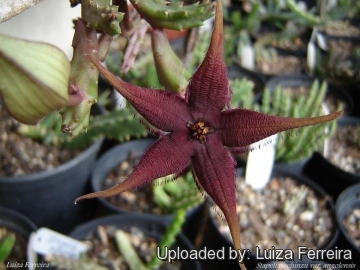 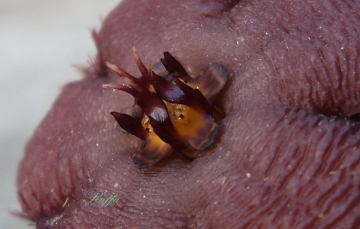 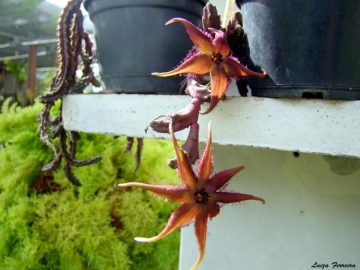 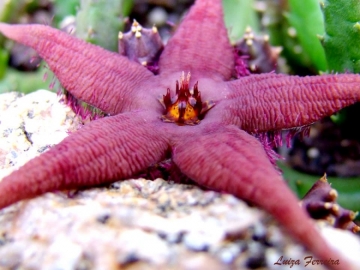 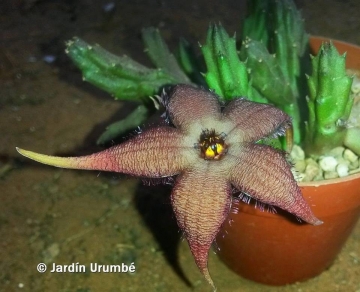 Cultivation and Propagation: Stapelia schinzii is a very unusual, xerophytic plant adapted to dry soils. It is very suitable for a hanging pot.
Growth rate: It is a somewhat slow growing Stapeliad that will make large clumps given the best conditions. Most plants will offset readily, and clumps can be produced in a few years.
Soils: It likes very porous mineral cactus mix soil, pH 7,5 to 8,5 (mildly alkaline), but can become too elongated if compost is too rich.
Repotting: This plant needs plenty of space for its roots, repotting should be done every other year or when the it has outgrown its pot. Use pot with good drainage.
Watering: It needs regular watering, especially during the hottest summer days; provide also some light watering if the green house temperatures in winter are elevated. Either excessive or very scarce watering can induce rot.
Fertilization: Feed with a high potassium fertilizer in summer.
Frost Tolerance: For safe cultivation winter temperatures must be kept over 10° C, but it can withstand winter night-time temperatures down to about 5°(or less) Celsius for short period. Freezing temperatures are often fatal. In the rest period no high atmospheric humidity!!
Sun Exposure: Best for half-shade but grow well in full sun and full shade too. Tends to bronze in strong light, which encourages flowering, but is likely to suffer from sun scorch or stunted growth if over exposed to direct sunlight during the hottest part of the day in summer.
Diseases: This species is relatively resistant to cryptogamic diseases than others and is quite resistant to the “Balck spot” disease of Asclepiads. Rot it is only a minor problem with Stapelia schinzii if the plants are watered and “aired” correctly. If they are not, fungicides won't help all that much.
Uses: It is an excellent plant for container growing. Cascading, clustering, great for a hanging display. Stems may possibly become purple and limp in winter, but revitalize in early spring. It always looks good and stays small. It look fine in a cold greenhouse and frame or outdoor in a rockery.
Propagation: Seeds and cuttings. Cuttings will root only in hot weather. Cuttings must be kept very dry to root. Seeds germinate readily if they are sown when fresh.