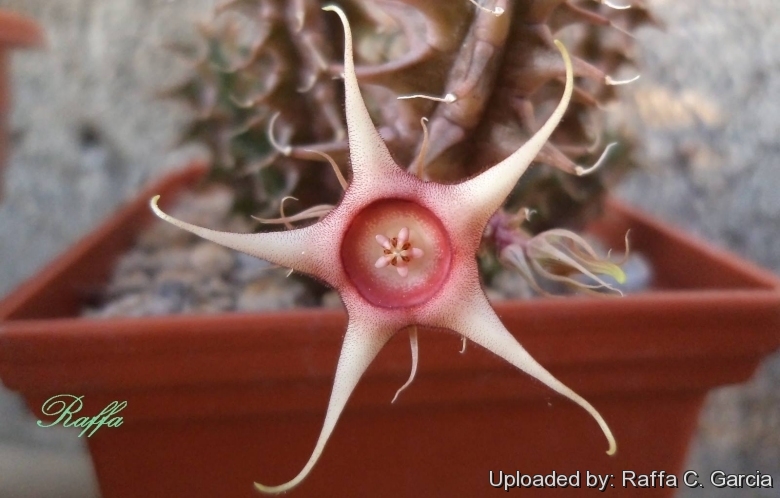 Origin and Habitat: Huernia verekeri subs. verekeri occurs in Botswana, Namibia, Zambia, Zimbabwe and Mozambique, from the mouth of the Save River (which enters the Indian Ocean) almost to the Atlantic coastal region in Angola).
Habitat and ecology: It grows in stony places under trees or shrubs in woodland.

Description: Huernia verekeri is a very pretty and widespread tropical, floriferous species with 5- to 7-angled stems closely set with narrow soft teeth. The typical variety is a perennial erect, softly-spiked plant which produces an abundance of star-like flowers developing in succession. Flowers are cream to pinkish on the outside of the tube, inside purple-maroon around the circular rim of the wide shallow mouth of the tube, turning white towards the base, the corona is suborbicular, the inner lobes incumbent on but not as long as the anthers.
Derivation of specific name: verekeri: named after Louis Stanhope Amos Vereker (1874-1948), a Rhodesian farmer, who collected the type specimen.
Stems Erect, decumbent or ascending, spreading, joining at the base, succulent, leafless, green to purplish-green, c. 7-10 cm tall distinctly (5- to) 6- (to 7-) angular. Tubercles 3-15 mm long, soft strongly compressed.
Inflorescences: Profusely flowering, 1-5-flowered near the base of the stems pointing out-wards on a stout knobby peduncle c. 10 mm long set with many acuminate bracts, 3-5 mm long.
Flowers: Flowers, 35-45 mm in diameter, rotate. Sepals 5-8 mm long, usually prominent between the corolla-lobes. Corolla c 35-45 mm in diameter, inside basally white, mouth of the tube dark maroon, otherwise pale greenish-creamy or yellow. Corolla-tube c. 3 mm long, 6.5 - 8 mm in diameter, semiglobose, circular or obtusely pentagonal in top-view. Corolla-lobes 12-15 mm long, acute, horizontally spreading, narrowly lanceolate, attenuate, convex, both sides glabrous, margin of the tube and lobes hairy. Hairs fine, maroon, short, acute. Intermediate lobes small, strongly revolute. Corona suborbicular c. 2.5 mm tall, 3-4 mm in diameter. Outer corona-lobes ivory to cream, lobes spreading, reduced or fused into an obscurely pentagonal disk c. 3 mm in diameter. Inner corona lobes c. 0.3 mm long, , cream, tinged maroon, acute, tapering to a bristly apex, incumbent on but not as long as the anthers, dorsal hump much enlarged, horizontally spreading, round. Pollinia yellow-brown.

Subspecies, varieties, forms and cultivars of plants belonging to the Huernia verekeri group 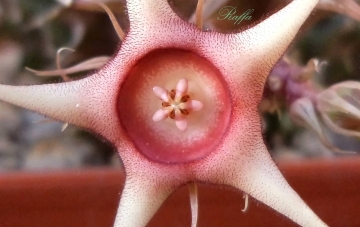 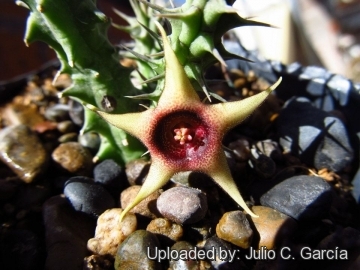 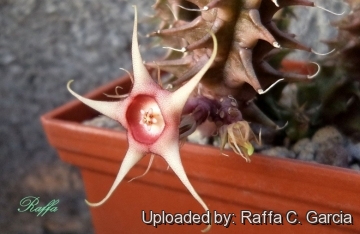 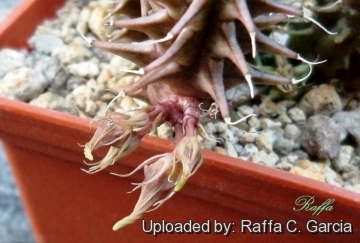 A rare 6-petaled fower. Photo by: Raffa C. Garcia
Send a photo of this plant.

Cultivation and Propagation: Spring: When winter ends and they begin to grow again, they will require much water and soaking the pots will no longer put the plants at risk for rot. In the spring they will grow well in partial shade and leaving them out in the rain may provide them with the water they need.
Summer: In the summer months they will tolerate heavy rain, but will be just as happy if the season is dry. It's best to sort out the stems while the plants are resting in the summer before they begin their autumnal growth cycle. They will tolerate very hot weather outdoors as long as they are kept in filtered light and this will encourage them to flower in the Autumn. They also enjoy some fertiliser. Moving the plants as they are developing buds may cause them to spontaneously abort the flowers all together.
Autumn: In the fall keep them outdoors until the night time temperatures drop below the 5°C.
Winter: Winter care presents no problems at 5°-10° C with plenty of light. As soon as they are flowered be sure to take extra precautions to keep them dry, because damp cool conditions when the plants are resting is an invitation to fungal infections, but - according to temperatures –some occasional lit watering may be useful.
Potting medium: Since roots are quite shallow, use a cactus mix or add extra perlite or pumice to regular soil potting soil. A gritty, very free-draining compost is suitable, and clay pots help the plants to dry out between watering. Re-pot every 2 years.
Pest and diseases: Huernia are generally fairly easy to grow, especially if kept pest-free. They are very susceptible to stem and root mealy bugs, and damage from these may well initiate fungal attack. Any time when there is a dead or dying stem in the pot it is important to remove it immediately and completely before other healthy stems can become ill too, isolate the healthy parts, dry them off, and re-root them in new compost.
Propagation: Easiest with stem cuttings. Allow cuttings to dry a day before planting. Stems must be laid (Not buried) on gritty compost and will then root from the underside of the stems. It can also be increased from seeds sowing in spring in moist, sandy peat moss. Barely cover seeds. Seeds germinate quickly.
In any season it's best to lay the stems out for several days before replanting them and then pot them only in dry soil and withhold any water until they begin to shrivel or start growing again.