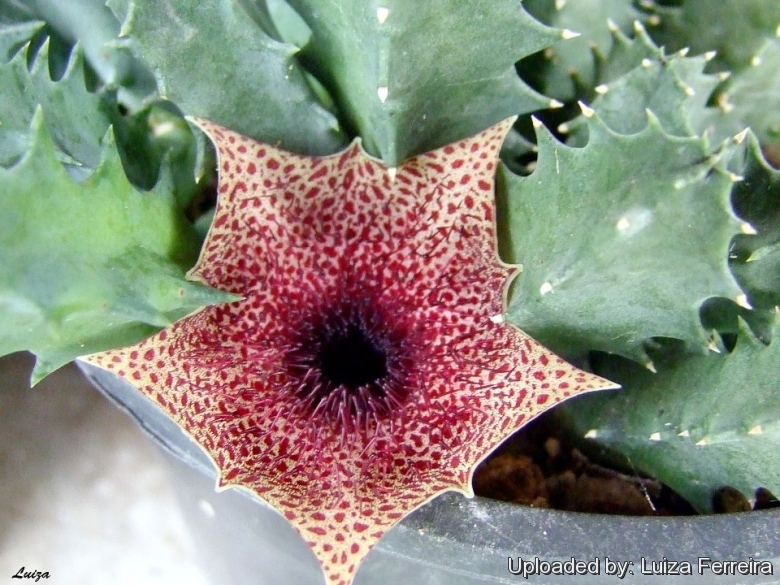 Origin and Habitat: South Africa (Western Cape, Northern Cape). The species is centred in the south- western Cape, both Little Karoo and coastal region, and north-westwards to Vanrhynsdorp.
Habitat and Ecology: Huernia clavigera grows in dry places in thickets and under shrubs.

Description: Huernia clavigera is a remarkable perennial succulents species with dull greyish-green, 4-(5-)angled stems tinged with pink, with acute, spreading teeth. It forms small dense clumps up to 10 cm in diameter and usually less than 5 cm (or under cultivation 10) cm high. The bell-shaped flowers are ochre-yellow or dull greenish-yellow covered with dark purple-brown warts and small blood-red spots and throat (but not the lobes) covered with stiff outstanding clavate (club-shaped) purple hairs.
Derivation of specific name: claviger (Latin) - 'club-bearing'; named for the stiff clavate purple hairs in the tube.
Stems: About 5 cm high, erect or ascending, 12-25 mm thick, acutely 4–5-angled, glabrous, dull green, often blotched with purplish where exposed to the sun. Ribs with stout acute horizontal teeth, 2-6 mm long.
Flowers: 1–5 together at the base of the young stems, developing successively; pedicels 3-15 mm long, 2 mm thick, glabrous. Sepals 4-6 mm long, lanceolate or ovate-lanceolate, subulate-acuminate, glabrous. Corolla campanulate, a little contracted at the middle so as to resemble a wide-mouthed bell, 3-3.5 cm in diameter, with short slightly spreading or suberect lobes, outside prominently nerved, glabrous, pale greenish or yellowish-white; inside pale ochre-yellow or dull greenish-yellow, thickly covered with very minute dark purple-brown papillae and small blood-red spots, which in the tube become confluent into irregular blotches that nearly cover it or suddenly pass into narrow transverse lines or belts, bottom of the tube entirely blood-red, limb and throat (but not the lobes) covered with stiff outstanding clavate purple hairs. Tube 18-25 mm long. Corolla lobes 6-8 mm long and 8-10 mm broad, deltoid, acute or subacuminate. Outer corona 5-lobed, black, with the central part purple-brown velvety; lobes about 2 mm long and slightly broader, subquadrate or transverse, bifid, with obtuse teeth or rarely subequally 3-toothed, at each sinus between the lobes is a minute tooth. Inner corona-lobes 3-4 mm long, subulate, with a dorsal ridge at their base, connivent over the style-apex at the lower half, then diverging with erect tips, dark purple-brown.
History: Only some authors consider H. clavigera to be a good species; the others classify it as a local form of Huernia barbata. Nicolaas Jacquin described some plants in Imperial Gardens at Scönbunn in 1806. One of them was Stapelia clavigera. Haworth transfered it (1819) to genus Huernia. Alain White and Boyd Sloane recognized H. clavigera with var. maritima in 1937. Larry Leach recognized it as a species (1988). Peter Bruyns transferred it to Huernia barbata (2005).

Subspecies, varieties, forms and cultivars of plants belonging to the Huernia barbata group 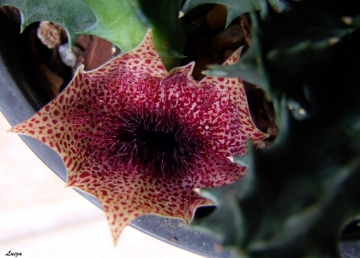 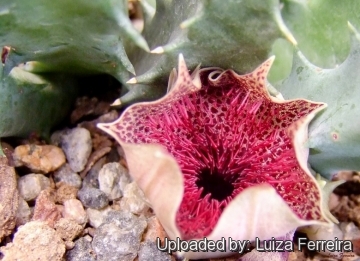 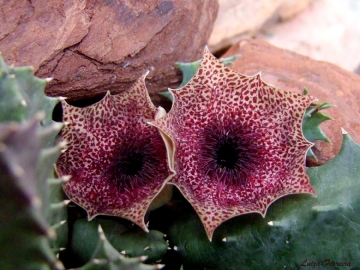 Huernia clavigera Photo by: Luiza Ferreira
Send a photo of this plant.

Cultivation and Propagation: Huernia clavigera has been long known and grows well in cultivation.
Spring: When winter ends and they begin to grow again, they will require much water and soaking the pots will no longer put the plants at risk for rot. In the spring they will grow well in partial shade and leaving them out in the rain may provide them with the water they need.
Summer: In the summer months they will tolerate heavy rain, but will be just as happy if the season is dry. It's best to sort out the stems while the plants are resting in the summer before they begin their autumnal growth cycle. They will tolerate very hot weather outdoors as long as they are kept in filtered light and this will encourage them to flower in the Autumn. They also enjoy some fertiliser. Moving the plants as they are developing buds may cause them to spontaneously abort the flowers all together.
Autumn: In the fall keep them outdoors until the night time temperatures drop below the 10°C.
Winter: Winter care presents no problems at 10° C with plenty of light. As soon as they are flowered be sure to take extra precautions to keep them dry, because damp cool conditions when the plants are resting is an invitation to fungal infections, but - according to temperatures –some occasional lit watering may be useful.
Potting medium: Since roots are quite shallow, use a cactus mix or add extra perlite or pumice to regular soil potting soil. A gritty, very free-draining compost is suitable, and clay pots help the plants to dry out between watering. Re-pot every 2 years.
Pest and diseases: Huernia are generally fairly easy to grow, especially if kept pest-free. They are very susceptible to stem and root mealy bugs, and damage from these may well initiate fungal attack. Any time when there is a dead or dying stem in the pot it is important to remove it immediately and completely before other healthy stems can become ill too, isolate the healthy parts, dry them off, and re-root them in new compost.
Propagation: Easiest with stem cuttings. Allow cuttings to dry a day before planting. Stems must be laid (Not buried) on gritty compost and will then root from the underside of the stems. It can also be increased from seeds sowing in spring in moist, sandy peat moss. Barely cover seeds. Seeds germinate quickly.
In any season it's best to lay the stems out for several days before replanting them and then pot them only in dry soil and withhold any water until they begin to shrivel or start growing again.