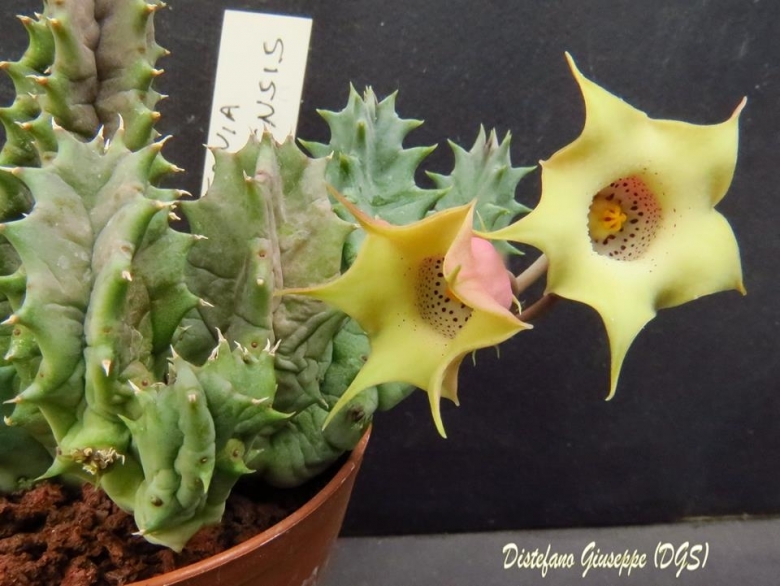 Description: Huernia quinta var. blyderiverensis (Huernia blyderiverensis) is a small perennial succulent species with grey-green acutely-angled stems and showy cream flowers at the stem base. Huernia blyderiverensis is distinguished from Huernia quinta by the spotted (not transversely striped) larger corolla with curved spreading lobes, moreover the papillae are shorter (not bristle-tipped or with bristle less than 0.25 mm long) and the mouth of the tube is more constricted.
Derivation of specific name: As the name suggests this species is found in the vicinity of the worlds third largest canyon, the Blyde River Canyon (type locality) near the junction with Ohrigstad River, Mpumalanga, RSA.
History: This plant was discovered by Alan Percy-Lancaster by Ohrigstad River Blyde in about 1975. Larry Leach (1988) described it as a variation of Huernia quinta. Peter Bruyns treated it as a separate species (2005).

Subspecies, varieties, forms and cultivars of plants belonging to the Huernia quinta group 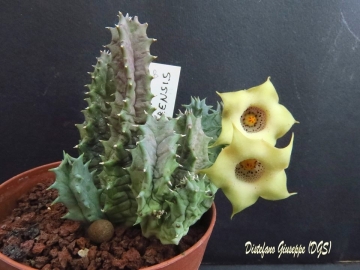 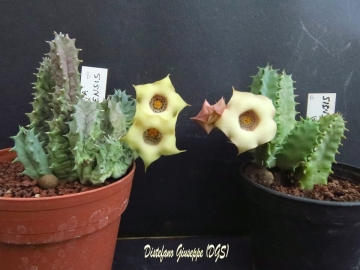 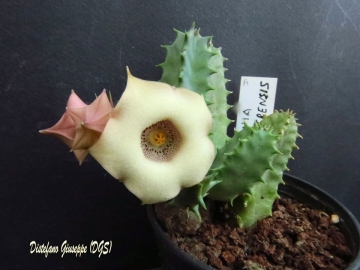 Cultivation and Propagation: Not difficult to grow. Huernias require moderately watering through the growing season but enjoy plenty of water and some fertiliser in hot weather, this helps them to flower freely. Water more sparingly in winter according to temperatures. But, as with most asclepiads, it is unwise to leave them wet in cold weather.
Frost Tolerance: It is usually recommended to overwinter them in warm conditions (at 10 deg) but despite the African origin they seem to grow well and flower without the extra heat which one might have thought necessary and occasional temperature near 0 deg. are tolerated if kept dry.
Potting medium: Since roots are quite shallow, use a cactus mix or add extra perlite or pumice to regular soil potting soil. A gritty, very free-draining compost is suitable, and clay pots help the plants to dry out between watering.
Pest and diseases: Huernia species vary in their susceptibility to rotting, but are generally fairly easy to grow, especially if kept pest-free. They are very susceptible to stem and root mealy bugs, and damage from these may well initiate fungal attack. If you do have problems with a stem or with basal rotting, you can reliably isolate the healthy parts, dry them off, and re-root them in moist compost.
Propagation: Easiest with stem cuttings. Allow cuttings to dry a day before planting. Stems must be laid (Not buried) on gritty compost and will then root from the underside of the stems. It can also be increased from seeds sowing in spring in moist, sandy peat moss. Barely cover seeds. Seeds germinate quickly.