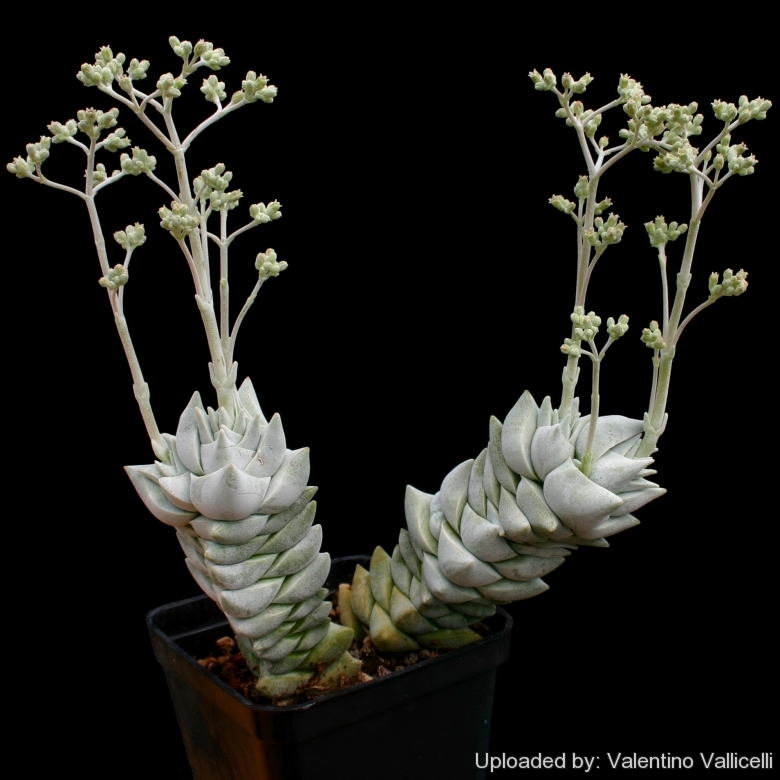 Crassula cornuta Photo by: Valentino Vallicelli
This dwarf Crassula that can be easily housed in a small place.

Origin and Habitat: It is a native of South Africa (Bushmanland as far cast as Kakamas, south-wards through Namaqualand to Vanrhynsdorp) and south-western Namibia.
Habitat: Succulent Karoo desert, quartz gravely flats and gravelly or rocky slopes.
Ecology: This small plants which absorbs moisture through the epidermis.

Description: Crassula cornuta has silvery-grey leaves that fit tightly together hiding the stem and making a distinctive column. It is a variable succulent species included with Crassula deceptor, but in cultivation it often keep the original name to avoid confusion with deceptor which itself can be a very variable plant. Usually Crassula cornuta has almost white leaves which are longer and more angular, while Crassula deceptor usually has rounded greyer leaves, however there is a gradual series of transitional forms and it is almost impossible to tell them apart, so now they are all synonymized with Crassula deceptor.
Habit: It is small perennial succulent herb forming characteristic 4-ranked columns, it stays relatively low and clumps readily.
Stem: The internodes are short with the subsequent leaves showing extremely dense packing resulting in compact columns to a height of about 70(-150) mm and 25 mm in diameter
Leaves: Fleshy, 1,5-2 cm long, broadly triangular-ovate, united, about 14 mm more or less pointed in the shape of canoes, tightly imbricated in overlapping pairs along a usually unbranched stem, which stack off a central stem and produce a square pillar. Grey-green covered with a light, white powdery (pruinose) surface and hard spherical papillae and the scattered hydathodes are often conspicuous, especially in adverse conditions. These characters preserve moisture and protect from strong sunlight. The species shows a complete range of leaf form from adpressed, to spreading, to erect leaf apices.
Inflorescences: Few-branched loose cyme, peduncle is 20-80 mm long and covered with round papillae.
Flowers: Very small, sweet-scented. Corolla tubular, cream to pinkish, fading to brown.
Blooming season: Flowers appears in every time of the yeas when conditions are appropriate, but they tend to be produced mainly during winter as these are basically a southern hemisphere plants. It will flower every year.

Subspecies, varieties, forms and cultivars of plants belonging to the Crassula deceptor group 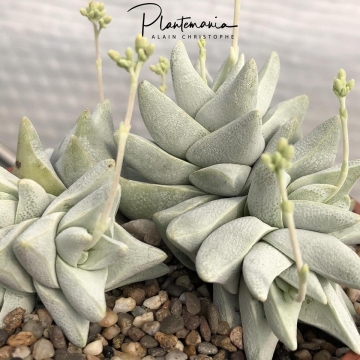 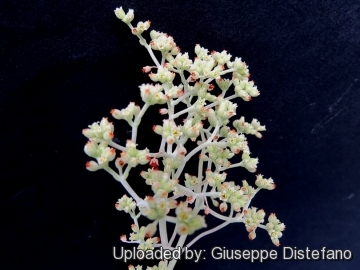 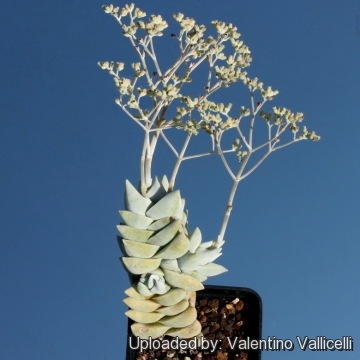 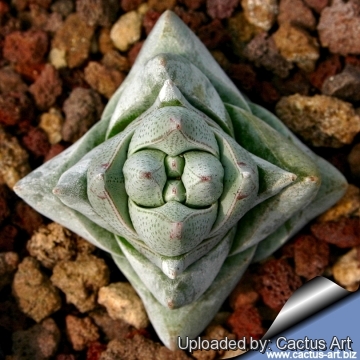 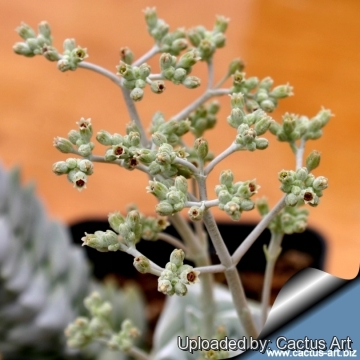 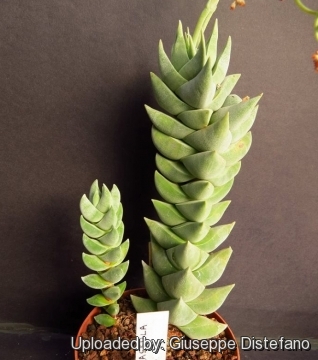 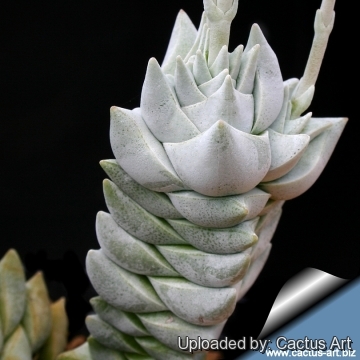 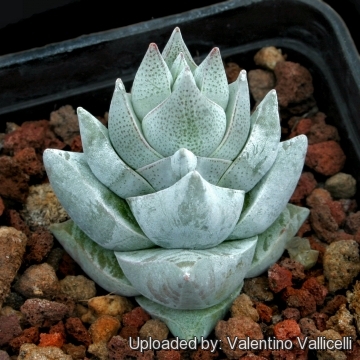 Cultivation and Propagation: Crassula cornuta are of easy cultivation and relatively low maintenance, which makes them a good houseplant, and can be an excellent subject for the beginning succulentophile (they can grow easily on window sills, verandas and in miniature succulent gardens where they are happy to share their habitat with other smaller succulent plants, or in outdoor rockeries). They are spring and autumn grower (summer dormant).
Soil: They prefer a very porous potting mix to increase drainage. A acid soil is ideal. You can grow a plant in a 6-10 cm pot for years and have perfectly happy plants. For best results, use a shallow pot.
Watering: Provide some water all year around, in the wild most of the growth occurs during spring and autumn. During the hot summer months, the soil should be kept moist but not overly wet. During the winter months, water only when the soil becomes completely dry. Wet soil quickly causes root and stem rot, especially during chilly winter months, but can re-root if taken care of. No water should ever be allowed to stand around the roots. Low ambient humidity is always needed.
Fertilization: The plants are fertilized only once during the growing season with a balanced fertilizer diluted to ½ the recommended strength.
Sun Exposure: They need full sun or bright, filtered light with ample airflow to stay compact, but avoid direct blasting sun in mid summer (with sun exposure the leaf develops a nice brownish tint), they do not do well in full shade as they tend to etiolate, fall over and rot easily.
Pest & diseases: Crassulas are sensitive to mealybugs.
Rot: Rot is only a minor problem with Crassula if the plants are watered and “aired” correctly. If they are not, fungicides won't help all that much. Care must be given in watering, keeping them warm and wet while growing, and cooler and dry when dormant.
Hardiness: Although the plants will survive mild frost if kept dry (hardy as low as -5° C) they should be protected from frost to prevent scarring. USDA 9b-12
Use: It is an excellent potted plant great for windowsill culture as well as in rock gardens. Indoors only in brightest position.
Pruning: Remove dead ﬂower spikes only.
Propagation: They are easily propagated by the removal of off shoots, remove a lateral shoot and insert the basal part buried in the soil. This shoot should root within a month, and small offshootd will form at the base. They can also be grown from seed.