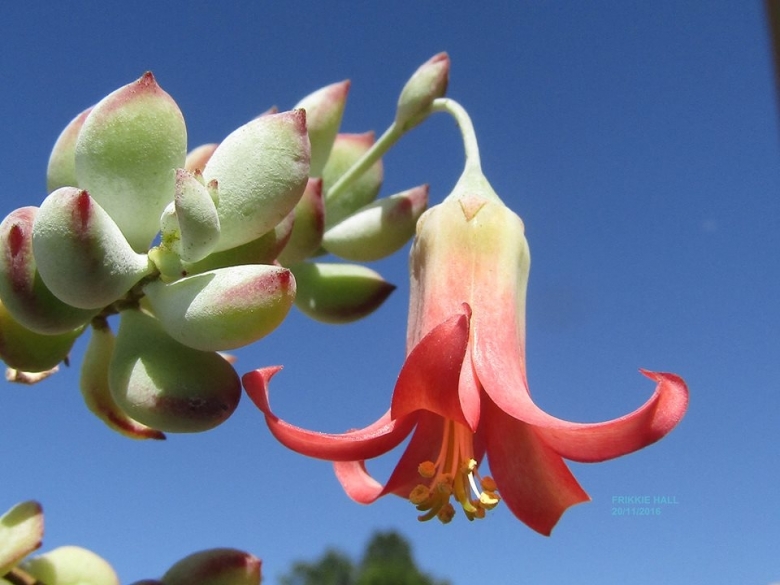 Origin and Habitat: Cotyledon pendens is only known from sheer cliff faces along the Bashe River in the Eastern Cape (former Transkei region).
Altitude range: 300–400 metres above sea level
Habitat and ecology: This species grows in a predominantly summer rainfall region on south-facing shale cliffs firmly-rooted in crevices forming drooping mats (cliff hanger). The drooping stems will root where they come in contact with any crevice, establishing new clones. The summers are hot, winters cooler, dry and without frost. Rainfall occurs mainly during summer and ranges between 1000–1250 mm (mainly thunder-showers, October to May). Maybe it is the hot summers of the region that evolved the preference for the more shaded, south-facing riverside cliffs into the plant’s nature. The flowers are pollinated by sunbirds. At more level ground the deep gorge (where this plant can be found) is covered with dense Eastern Valley Bushveld. The plant shares its habitat with other cliff-dwelling plants such as Aloe reynoldsii, Bulbine thomasiae, Adromischus liebenbergii subsp. orientalis, Albuca batteniana, Ornithogalum longibracteatum, Drimia anomala, Drimia loedolffiae, Haworthia cymbiformis var. setulifera, Crassula cordata, Crassula intermedia, Crassula perforata, Ceropegia sandersonii, Albuca batteniana, Peperomia blanda, Rhipsalis baccifera, Ledebouria ensifolia, Haemanthus albiflos, Plectranthus hadiensis and Pelargonium acraeum. Other non-succulent plants observed in the habitat include: Ficus burtt-davyi, Ficus burkei, Schotia latifolia and Bauhinia bowkeri.

Description: Cotyledon pendens is a rare succulent much-branched shrublet differentiated from other Cotyledon by the thin, hanging shoots up to 60 cm long and the inflorescences with distinct, but short flower stalks. The grey-green succulent leaves, covered with powdery bloom, are an adaptation to its dry habitat, the leaf margin is an attractive reddish colour. Cotyledon pendens has eye-catching orange-red bell-shaped flowers produced at the ends of the branches. It is one of the lesser known cotyledons.
Derivation of specific name: The specific epithet ‘pendens' pertains to its pendent growth habit.
Stems: Dense, hanging up to 60 cm long, initially soft and flaccid, c. 2 mm in diameter, whitish green (due to a powdery bloom). The nodes are about 7–15 mm apart. Both the stems and leaves are at first sparsely beset with glandular hairs, becoming hairless with age (glabrescent).
Roots: Fibrous and not succulent.
Leaves: Crowded and highly succulent, in opposite pairs, pendent, the leaf blades, elliptic to ovoid, 18–25 mm long, 10–15 mm wide and 7–10 mm thick, the tip (apex) ending abruptly in a sharp point (mucronate), the base is wedge-shaped. The leaf surface is whitish grey-green due to the powdery bloom, the leaf margin is an attractive reddish colour. Petiole 1.5–2.0 mm long.
Inflorescence: Hanging, branched produced at the ends of the branches 50–90 mm long, with up to 4 flowers (sometimes only a solitary flower). Peduncle about 8–18 mm long and 2 mm in diameter.
Flower: Bell shaped, hanging down, orange-red 40–45 mm long, 12–13 mm broad with a cylindrical corolla tube slightly bulging in the middle. The calyx with pointed sepal tips clasping only the back end of the tube. Lobes spreading, recurve, curling right back, exposing the anthers. Stamens 10 produced in two whorls, filaments yellowish green and 18–20 mm long, fused into a tube in the lower third. Anthers spherical bearing yellow pollen.
Blooming season: This species flowers during midsummer.
Related species: Cotyledon pendens is closely related to Cotyledon woodii, but differs by its flaccid pendent growth and branched inflorescence. Cotyledon woodii is a woody erect shrub up to 1 m high known from the southern parts of the Eastern Cape. 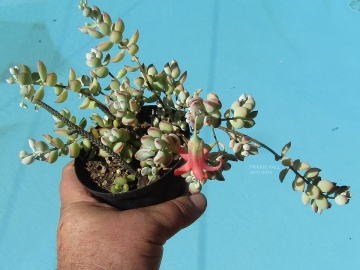 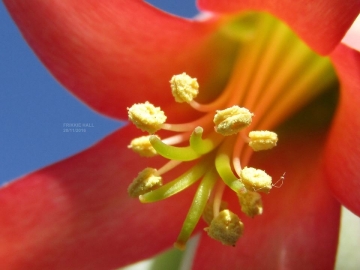 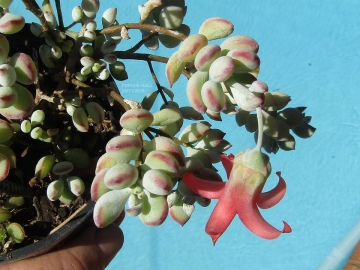 Cotyledon pendens Photo by: Frikkie Hall
Send a photo of this plant.

Cultivation and Propagation: The cliff cotyledon (Cotyledon pendens) is an hanging succulent that does well in containers, and makes a good houseplant. It is not difficult to cultivate. Plants grow well in cultivation and are best suited for dry gardens where frost is absent or very light.
Growth rate: Moderately fast.
Soil: It grows best in sandy-gritty soil. Good drainage is very important as it is prone to root rot.
Fertilization: Feed it once or twice during the growing season with a fertilizer specifically formulated for cactus and succulents (poor in nitrogen), including all micro nutrients and trace elements diluted to ½ the strength recommended on the label.
Watering Needs: It is a very dry-tolerant plant. Water regularly in the growing season, but avoid water-logging and let dry between waterings. Water with caution in winter, as the plant can lose its roots if the soil stays cold and wet for extended periods. If grown in a container, bottom watering by immersing the container is recommended. It must have very dry atmosphere.
Sun Exposure: Does well in sun, but can handle some shade, too. In shade the leaves colour will remain more green, while in harsh full sun conditions the foliage can develop a grey- green powdery bloom. In summer keep cool and provide some shelter from direct sun during the hottest hours. It can be sunburned if moved from shade/greenhouse into full sun too quickly. It tends to get really leggy in deep shade).
Frost Tolerance: Protect from frost to prevent scarring. It requires a minimum temperature of about 5°C, but will take a light frost and is hardy down to -5° C for short periods if it is in dry soil (Lethal temperature in habitat -6 to -10 ° Celsius). USDA zones 9A – 11. In areas prone to frost, grow in an intermediate greenhouse or conservatory, in pots.
Uses: It would be ideal for window sills and balconys. Plants are mat-forming and due to their habit should help prevent erosion. They can be grown on steep embankments where branches should soon becoming pendent. They also thrive in hanging baskets and containers.
Warning: The plants are highly poisonous to humans and domestic animals, especially sheep and goats, and the meat of animals killed by cotyledonosis remains toxic even after cooking. Poisoning may be acute or chronic, the latter due to the cumulative effect of the toxin.
Pests and diseases: May be susceptible to mealybugs and rarely scale. Protect from cold.
Propagation:Best grown from cuttings during the warmer months. They can be planted in sand and kept moist, in a sunny or partially shaded area. Rooting is rapid and plants can be planted out directly to the chosen site or container. Plants also grow from leaf cuttings rooted in sand, which is unique among the Cotyledon species.