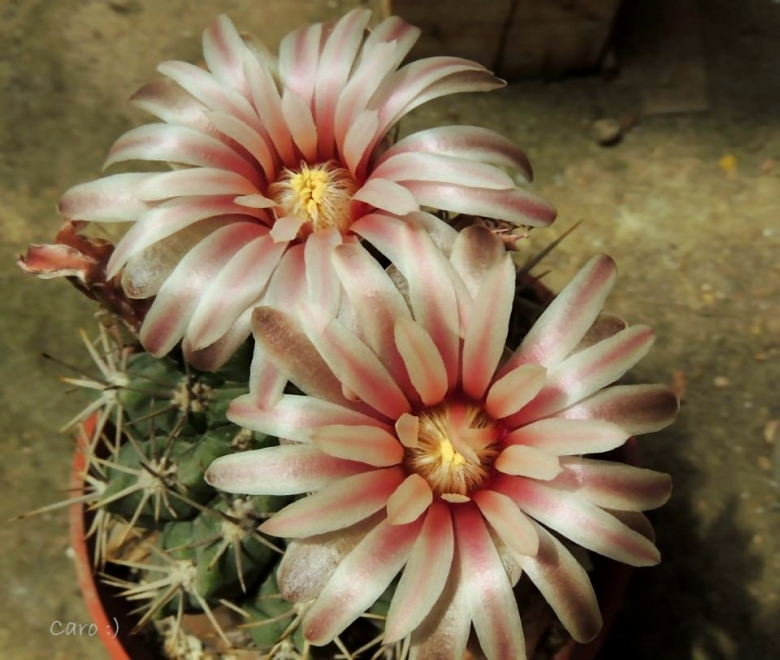 Origin and Habitat: Gymnocalycium mostii has a wide range, in Argentina (Córdoba).
Altitude range: 500 to 1,500 metres above sea level.
Habitat and Ecology: This cactus species grows on outcrops in chaco forest, and in grasslands. The species is extremely abundant and there are no major threats, the species is locally collected but this does not affect the population.

Description: Gymnocalycium mostii is a solitary cactus species with a flattened dark green stem usually less than 13 across. The ribs are broad and obtuse with a small sharp chin below each tubercle. The horn-coloured spines take a nice red colouring when wetted. Its pale rose-pink blooms are profusely produced during the growing season.
Derivation of specific namae: The specific epithet honours the plant collector Carlos Most, who collected in Argentina.
Stem: Depressed-globose, 6 to 7 cm high, 13 cm in diameter, dark to bluish green.
Ribs: 11 to 14, vertical or slightly spiralled with age, broad and obtuse, deeply notched, with prominent, well defined tubercles.
Areoles: Roundish or elliptical, 6-8 mm long, with creamy-white wool when young, almost bare as they ages.
Spines: Strong, subulate, yellowish-brown or horn-coloured, darker brown and glossy at base and tips, becoming grey with age, stout, curving toward the stems; radial spines 7 to 9(-11), unequal, 6 to 22 mm. long; central spine solitary (occasionally 2), 18 to 20 mm Long.
Flower: Campanulate, rose pink, 6 to 8 cm broad. Tube short and thick, shining bluish green, with 8 to 10, semicircular, pale edged scales. Perianth-segments spreading pale rose pink with darker base, oblong.
Fruits: Ovoid to almost spherical, slate blue-green, to 2 cm long and 1.5 cm in diameter.
Seeds: Roundish, 0.7-0.9 mm, dark-reddish-brown to black, matt, with whitish hilum.

Subspecies, varieties, forms and cultivars of plants belonging to the Gymnocalycium mostii group 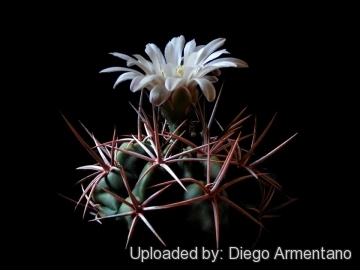 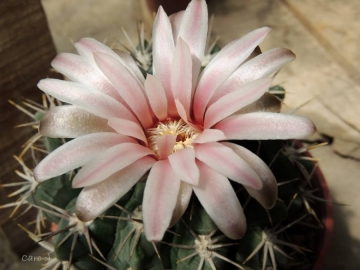 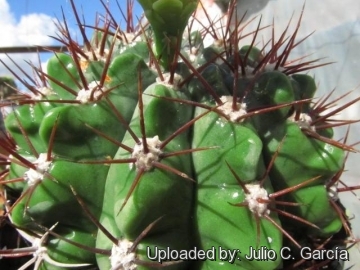 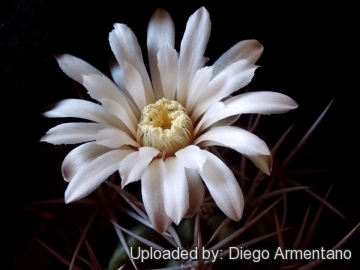 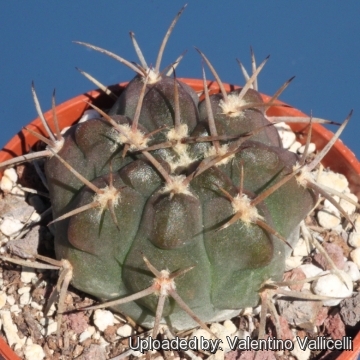 Cultivation and Propagation: Gymnocalycium mostii is a summer grower species that offers no cultivation difficulties. Water regularly in summer ( but can handle excessive water to few water) Keep this plant almost dry in winter at a minimum temperature of 0°C, prefer relatively rich substrate and low pH compost (if possible not limestone) otherwise growth will stop altogether. Feed with a high potassium fertilizer in summer. It is quite frost resistant if kept dry (Hardy to -12C). This plant needs plenty of space for its roots, repotting should be done every other year or when the it has outgrown its pot. This species is particularly easy and accommodating, seldom suffer of cryptogamic diseases.
Sun Exposure: Light shade. It may tolerate bright situations but is likely to suffer from sun scorch or stunted growth if over exposed to direct sunlight during the hottest part of the day in summer.
Propagation: Direct sow after last frost. (seldom produces offsets)
Seed Collecting: Permit fruit to ripen. Fruit must be significantly overripe before harvesting seed; clean and dry seeds.