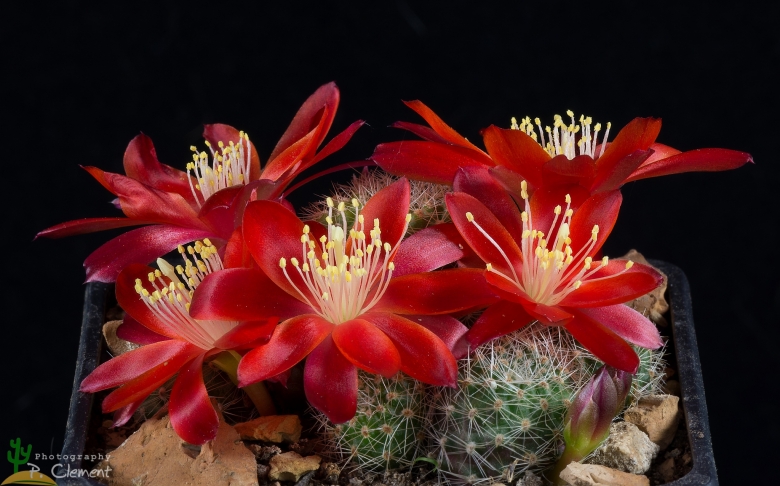 Origin and Habitat: Higher Andes of Southern Bolivia (Tarija) and Argentina (Salta and Jujuy)
Altitude range: 2500-3000(-3700) metres above sea level.
Habitat and Ecology: The species occurs on rocky lands in seasonally dry inter-Andean valleys. In Bolivia it is found growing together with Sulcorebutia tarijensis.

Description: Rebutia spegazziniana var. atroviridis, described by C. Backeberg as Aylostera spegazziniana var. atroviridis in 1951, is a local or morphological form of the very variable Rebutia spegazziniana with darker bluish grey-green skin, and lighter, weaker spines which clearly differentiate it from the nominate species that usually has somewhat coarser and more brown spines obscuring the green or yellowish-green stems. Rebutia spegazziniana var. atroviridis is variable and has also at times been referred to a darker form of Rebutia fiebrigii. Anyway (whatever the scientific name is) this easy to grow cactus is highly priced for its vibrant dark red blooms.
Habit: It is a tiny solitary or clustered cactus, branching at ground level to form low dense groups or mounds up to 15 cm wide. It grows quite close to the ground and offsets only with age. It would appear that in cultivation it grows larger and clusters more vigorously than in habitat.
Stems: Individual heads 6-9( or more) cm high, 2-5 cm in diameter, globose to flattened globose (sometime short-cylindrical in cultivation). The colour of the epidermis is dark bluish grey-green , often with violet tints in full sun.
Ribs: About 18, forming prominent tubercles.
Areoles: Small, white.
Spines: Short glass-white with darker tips, bristly, awl-shaped to needle-like.
Central spines: (0-)1-6, yellow with brown tips, to 3 mm long.
Radial spines: All straight, flattened against the stem surface, as many as 14, up to 4 mm long, yellowish, sometimes with brown tips.
Flowers: Diurnal, borne on the stems' side near ground level, 2,5 to 4 cm long and in diameter, bright red. Stigma lobes are pale greenish, anthers are cream coloured.
Fruits: Globose, reddish green.
Seeds: Black, about 1,2 mm long, 0,8 x 0,7 mm wide, elongate oval, with a more curved dorsal side, testa with small, tubercles, hilum basal brownish.
Roots: Tap root.
Remarks: Rebutia spegazziniana is a widespread and variable species that has received an undue number of names. The differences usually concern only the spination, however the colouring, size and density of spines is greatly influenced by the conditions of culture, at lower light levels the spines are less numerous, delicate and white, while with strong solar radiation the spines are stronger with a darker tint. Minor differences can also be found in the colour of flowers sometime with a more pink or orange tint.

Subspecies, varieties, forms and cultivars of plants belonging to the Rebutia spegazziniana group

Notes: It would appear that in cultivation they grow larger and cluster more vigorously than in habitat. 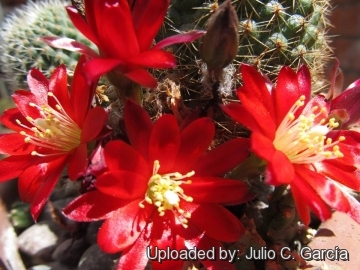 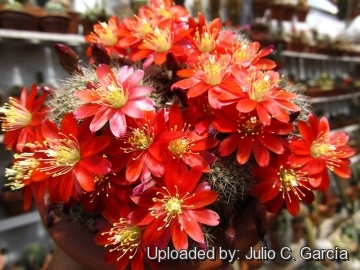 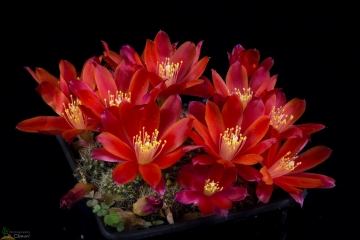 Cultivation and Propagation: It is easy to grow and recommended for beginners. Prefer gritty, porous mix with a pH slightly on the acidic side. Full sun to light shade, Water regularly in summer but do not overwater (the root system is rot prone) and allow the pot to dry out between waterings. Keep dry in winter Hardy to -4°C it will take low temperatures when dry and do require a winter rest period. This species will occupy a small flower pot comfortably and remain a manageable sized house plant.
Pest and disease: This plants are subject to mealy-bug attack and to fungus and rot problems brought about by overwatering and high humidity.
Propagation: Seed or offsets.